What is Leptospirosis in Dogs? 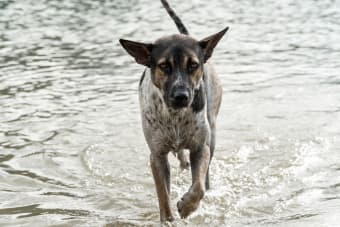 Silver Springs Clinic has seen an alarming increase in cases of dog leptospirosis recently. This disease is typically seen in dogs but can easily be transmitted to their loving owners. Our Mechanicsburg vets are here to discuss the symptoms you need to look out for, and tips to protect your pet.

What is leptospirosis in dogs?

Leptospirosis is a disease that can harm your dog's, farm animals, and even your family's health. It occurs when a bacterium is known as Leptospira (found in water and soil all over the world) contaminates a substance through contact with urine. We've also seen cases of leptospirosis in cats, which feed on host animals like rodents.

This bacteria has been reported almost everywhere, but it is most commonly found in warmer climates with high rainfall. According to research, this disease has slowly spread into areas of the United States such as Colorado, Utah, and Arizona.

While this bacteria can be found anywhere, it is more commonly found in warmer climates with more rain. According to research, the disease has gradually spread into the Western United States, including Colorado, Utah, and Arizona. This disease appears to have made its way into California, as our Mechanicsburg vets have recently seen a significant increase in cases.

How do dogs develop leptospirosis?

Every pet is at risk of catching leptospirosis, regardless of where they live in the world (urban, suburban or rural areas). The following factors can increase your pet's risk:

What are the symptoms of leptospirosis in dogs?

Leptospirosis symptoms in dogs include:

Microscopic Agglutination Test: This is the gold standard for diagnosing leptospirosis, and it detects the presence of antibodies against Leptospira in the dog's blood. Infection is confirmed if the level of antibodies (called a "titer") is high enough.

As with many other diseases, preventing leptospirosis is far more beneficial than treating it. If your dog hasn't been immunized against this disease, consult with your veterinarian to see if it's a good idea for your dog's lifestyle.

The chance of a dog surviving leptospirosis, if the disease is found early enough, is around 80%. However, their kidney and liver function can be severely impaired. Thus, it's always best to prevent the disease with vaccination.

Our vets at Silver Springs Clinic offer the leptospirosis dog vaccine between 10 and 12 weeks of age as part of our vaccine schedule for dogs. After their primary leptospirosis vaccination, they will require a booster shot three to four weeks later. Beyond that, annual vaccines will be required to protect your dog throughout its lifetime.

Because leptospirosis can be transmitted to humans, if you suspect your dog is infected, avoid touching their urine with your bare skin and always wash your hands after petting them. Wear rubber gloves when cleaning any areas that your dog may have soiled, and disinfect any areas where your dog has urinated. Using a diluted bleach solution or a household disinfectant is one of the best ways to disinfect your home.

Leptospirosis can be treated with prescription antibiotics, which can also prevent other members of your household from becoming infected.

Due to the high demand for the vaccination for leptospirosis at Silver Springs Animal Clinic, we have limited appointment times and are expecting longer than anticipated wait times. Contact us today to be added to our next available appointment.

Looking for a vet in Mechanicsburg PA? Silver Springs Animal Clinic is accepting new patients! Our skilled veterinarians are passionate about improving the health of Central Pennsylvania companion animals. Contact us today to book your pet's first appointment.